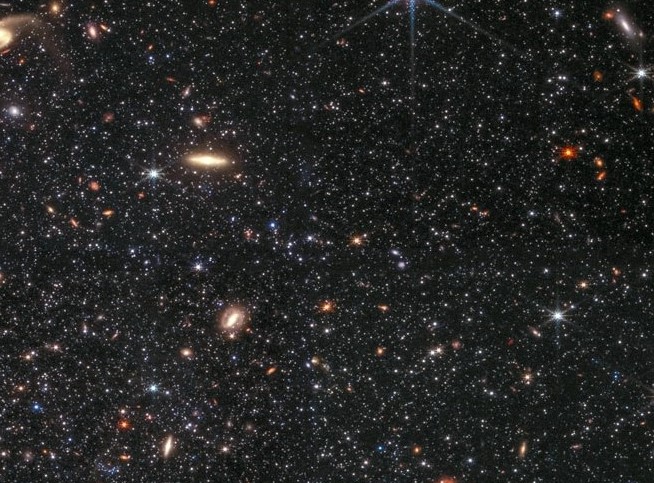 Taking Accessibility to the Stars 

NASA’s $10 billion James Webb Space Telescope is an epic collaboration of 14 countries, decades in the making. It launched in December of 2021, and the first astonishing images were shared publicly in July of 2022. Seeing the brilliant pictures with such sharp intensity, Jennifer Lotz, director of the International Gemini Observatory, likened it to putting glasses on.” She told NPR “Things we couldn’t see before are now crystal clear, and it’s been overwhelming. It’s been really overwhelming.”

A very special effort was forged to create an inclusive experience for those of us unable to fully appreciate the images with our eyes and the results are masterful. A team of scientists, writers and educators worked together to add vivid descriptions to the images captured by the Webb to help people with vision loss decipher the details. The move was widely praised by accessibility advocates and news outlets, raising awareness about the availability of, and need for, image descriptions in all online publications.

The alt-text that provides the spoken narration of these stunning images, can be accessed by users of screen readers at the WebTelescope.org and @NASAWebb on Twitter. The iconic images now speak for themselves; here are two favorites with their thoughtful descriptions.

“The galaxy toward the top of the image has a bright central core, surrounded by orange wisps and tendrils. The core is surrounded by a thin cloud-like aura of white that forms a diffuse spiral arm-like structure that trails off toward the upper left.

Between the top and center galaxies is a large region of bright orange.

The galaxy toward the bottom of the image sits alone, not appearing to touch any of the other four. It is nearly circular in shape and has a bright core surrounded by a cloud-like aura of white. This galaxy is almost completely white: No orange wisps or arms are apparent.

In the background of the image are numerous smaller, more distant galaxies of various colors, shapes, sizes, and brightness. Scattered across the image, in front of the galaxies are a number of foreground stars with diffraction spikes: bright white points, each with eight bright lines radiating out from the center. The sizes of the stars and diffraction spikes vary. Some are superimposed on large galaxies. The largest is to the upper right of the group of galaxies.”

“The image is divided horizontally by an undulating line between a cloudscape forming a nebula along the bottom portion and a comparatively clear upper portion. Speckled across both portions is a starfield, showing innumerable stars of many sizes. The smallest of these are small, distant, and faint points of light. The largest of these appear larger, closer, brighter, and more fully resolved with 8-point diffraction spikes. The upper portion of the image is blueish, and has wispy translucent cloud-like streaks rising from the nebula below. The orangish cloudy formation in the bottom half varies in density and ranges from translucent to opaque. The stars vary in color, the majority of which, have a blue or orange hue. The cloud-like structure of the nebula contains ridges, peaks, and valleys – an appearance very similar to a mountain range. Three long diffraction spikes from the top right edge of the image suggest the presence of a large star just out of view.”

The beautiful abundance of detail in the Webb descriptions could help everyone see the images more deeply. This is, after all, truly universal accessibility.