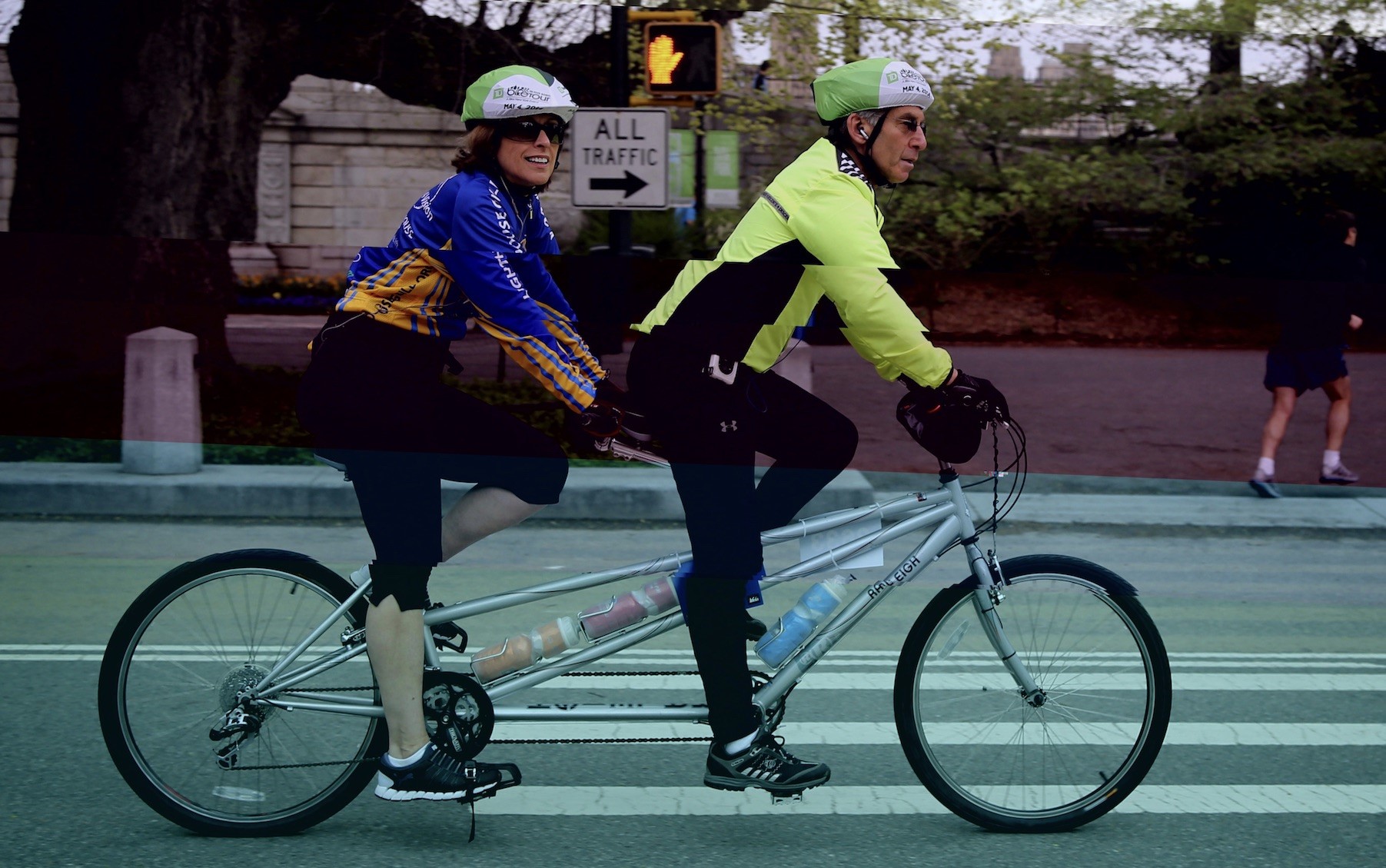 It Takes Two to Tandem

A bicycle built for two is a study in coordination. The rider in the front seat is called the Captain, for obvious reasons. The person in the second seat is called the Stoker, which means their role is to add fuel to the pedal. A tandem bike in tip-top condition will not ride well if the captain and the stoker are out of sync. What you learn on a tandem is meaningful to all relationships.

I can vividly recall the sheer joy upon finding my balance on a “two-wheeler” at the age of four. The beautiful freedom of my independent bike riding would come to an early end, before I reached the age of 40, sidelined by progressing vision loss. It took some time, but there would be an opportunity for me to ride again, in a new way. My partner Neil, an experienced and life-long rider himself, was delighted to buy a tandem bicycle and get me back on the road. The thoughtful and loving gift would transport us over hundreds of miles on city paths, country roads and several 5-Boro Bike Tours through the city of New York. It would also require us both to learn a few things.

There’s No “I” in Tandem

According to Tandem Cycling Works riding a tandem “is just like dancing, someone has to lead.” The Captain begins communicating, at the outset, to achieve a graceful start. There are four command words conveyed by the captain to keep the stoker informed of a needed action — On, Off, Bump and Shift. “On” means it’s time to pedal. “Off” means stop pedaling. “Bump” means brace yourself for the bump you can’t see coming. “Shift” means be prepared for a shift in gears. The timing of both the captain’s command and the stoker’s response is crucial to a smooth ride.

The rider in the second seat must relinquish control to the front, which is sometimes easier said than done. Some back seat riders are also back seat drivers, which only creates conflict. We have to let go, trust the leader, and pedal with purpose.

With some practice, each rider doing their part, it all comes together. It is like dancing, and now we’ve got the rhythm; we’re doing the samba. Every successful relationship benefits from these same principles… good communication builds trust and unity.

Tandem Cycle Works offers a step-by step guide for new riders. They also offer this bit of excellent advice to keep peace should the road get rocky. “On behalf of stokers everywhere, we would just like to remind you, dear captains, of one small thing. If you remember these 5 words, you will always have perfect harmony on your tandem adventures: The STOKER is Always Right!”