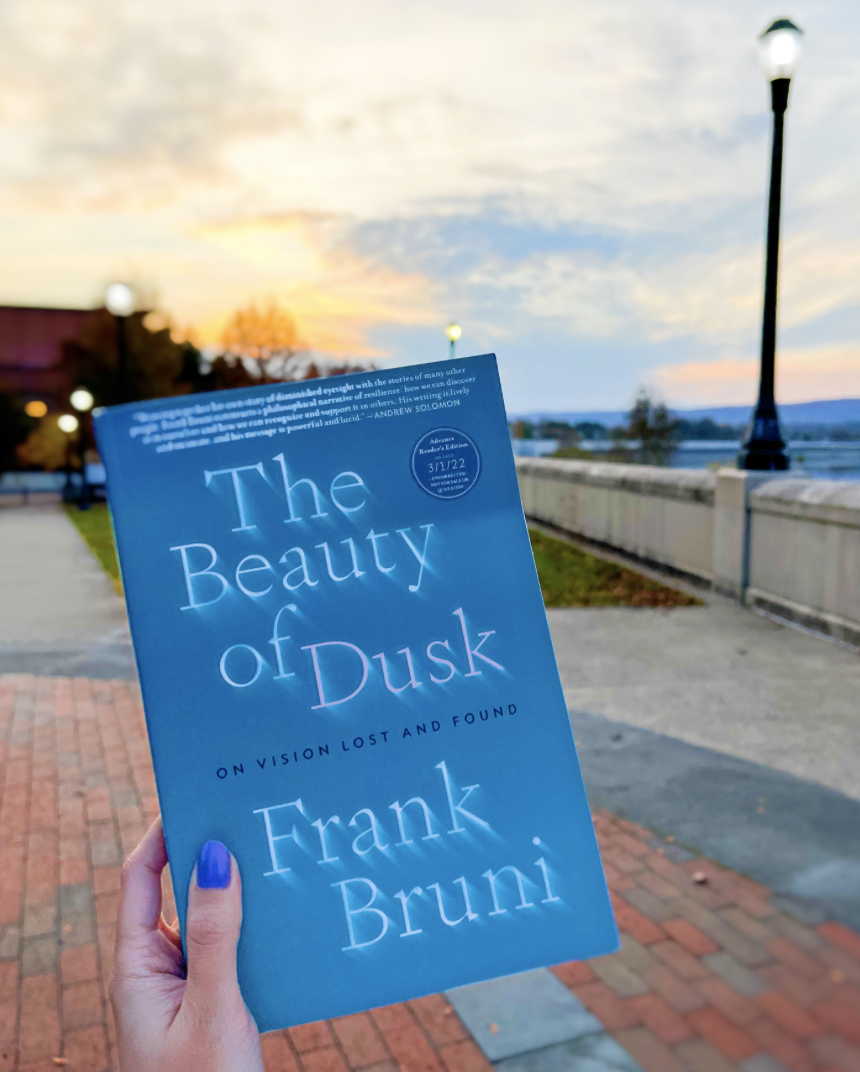 Upon opening his eyes one morning in October 2017, Frank Bruni finds his vision has changed. Making his morning coffee, he pours boiling water into a french press, but much of it misses the carafe and spills onto the counter. When he sits to transcribe an audio interview on his computer, he quickly discovers he’s having trouble making out the words as they appear to wobble on the screen. He wonders if it’s probably caused by the lingering sleepiness from the late night before? In the shower he tries to wash the fogginess out of his eyes, before going on with the days activities, “beating back any inkling of alarm.” This is the beginning of the story that is The Beauty of Dusk On Vision Lost and Found.

He sees an ophthalmologist and undergoes an arsenal of tests. Doctor #1 thinks it could be multiple sclerosis (but he’s wrong) and sends Frank on to a neuro-ophthalmologist. She repeats the arsenal and upon analysis renders a diagnosis. The vision loss in his right eye is most likely caused by a drop in blood pressure as he slept, resulting in restricted blood flow and causing a stroke of the eye, which damaged the optic nerve. The medical term for this condition is “non-arteritic anterior ischemic optic neuropathy,” also known by its acronym NAION. The bad news gets worse: there is no treatment. And if that’s not enough, there is one more thing, the doctor says there is a 40% chance it could happen in the other eye, (but this is not right either). The statistical risk is actually 20%, which is to say there is a definite chance he could go blind.

The mostly horrific and overwhelming news includes one hopeful thread, the doctor tells Frank there is a treatment being tested in a clinical trial, however he’d have to move fast to qualify for participation. He does exactly that, jumping through all the requisite hoops. He soon finds himself being prepped for the first dose of medicine to be injected directly into his eye. The way he describes this shot in the eye is palpable, “like a splash of acid delivered with a heavyweight’s punch.”

Instead of running away from the fear, he runs toward it, deliberately and with purpose. As “one eye closes another opens.” Frank Bruni begins to see the magnificence of human beings in a way that was not quite as clear before. He recognizes the inner strength, we don’t even know we have, until it kicks in, carrying us through the often abrupt and sometimes enormous challenges we are dealt. His clarity is sharpened by the many conversations and interviews he engages with old friends and new acquaintances dealing with adversity. It turns out if you talk about it, even in your own social circle, you will discover people you know, are dealing with more than you knew.

The Beauty of Dusk is about overcoming adversity with a sense of grace. It’s about finding our way through difficult times with a semblance of gratitude. It is about the human spirit that bonds us. Frank Bruni’s memoir comes at a time we are all in need of recovery.

Get The Beauty of Dusk on Apple Books

Get The Beauty of Dusk Audiobook on Apple Books