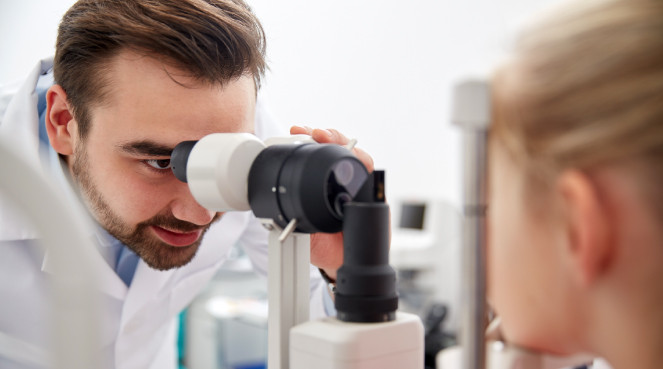 About a year ago, Marjorie Louer began having hallucinations. In a letter sent to the Association for Macular Diseases, OE Patients’ parent organization, Ms. Louer detailed her startling, mysterious experience:

“The most regular hallucination was a miniature of a woman’s round face, surrounded by bushy gray hair that extended onto the chin. She appeared as a bearded lady. Sometimes three or four images of my bearded lady would appear at the same time. These hallucinations would come and go. Other images were of varying patterns and colors of textile designs and of a New York City subway map.”

The constant hallucinations distressed Ms. Louer to the point she went to the Emergency Room of a prominent NYC hospital. She spent a night there and completed a series of brain scans and interviews. She also informed the doctors of her diagnosis of macular degeneration.

The next morning, she left the hospital with no better understanding of the hallucinations. But the reassurance that nothing was wrong with her brain came as a huge relief.

Still, Ms. Louer was determined to find out why she continued to hallucinate often enough to puzzle and distract her. She enlisted the aid of her daughter who set out to research the problem on the internet.

Ms. Louer’s daughter’s work online not only uncovered some important information for her mother but also identified pathways to explore the subject further. She learned that her mother’s condition was known as “Charles Bonnet Syndrome”.

Bonnet was a late 18th-century Swiss scholar who was trying to cope with the hallucinatory problems of his 87-year-old grandfather who had vision problems.

According to the Canadian Medical Association Journal, the reported incidence of Charles Bonnet Syndrome in people with vision impairment is 10% to 38%. This wide range is attributed to differences in definition, history-taking, and unwillingness by patients to disclose the symptoms because of concern that it implies mental incompetence.

“My grandfather is a respectable man,” Bonnet wrote in 1760, “full of health, of ingenuousness, judgement, and memory, who completely and independent from all outside influences, sees from time to time, in front of him, figures of men, of women, of birds, of carriages, of buildings. All of this appears to have a seat in that part of the brain involved with sight”.

The condition resulted from various signals sent by components of the eye to the brain.

Historically, not all authors cited loss of vision as a component of the diagnosis. However, the association with vision loss is now widely thought to be a required part of the diagnosis. Hallucinations as part of this Syndrome can occur in patients of any age with any type or degree of visual loss.

We are very grateful to Marjorie Louer and her very helpful daughter for raising awareness about an important, common problem for people diagnosed with vision loss.

For comments, questions or feedback, email us, or connect on Facebook or Twitter. We would love to hear from you!
About the Author: Bernard Landou

Bernard Landou has been the President of The Association for Macular Diseases since 2010 and the Editor-In-Chief of its Eyes Only Newsletter since 2007. He has extensively shared his experience and his perspective on living with age-related macular degeneration.

Bernard is a featured contributor at Ophthalmic Edge Patients (OE Patients), an online resource, presented by the Association for Macular Diseases, providing practical information and empowering advice for living a full and successful life with vision loss.